Rarely do I venture to the Upper East Side.  It takes a bit of convincing or a really good friend to get me to make the trip East to the likes of the 4, 5, 6 trains.

My friend, Rachel, had met some friends on 75th and 1st, my equivalent of no-man’s land.  However, for her, I was willing to make the trek, and ultimately I’m very glad I did.  She called me from a noisy bar.  When I googled the location, it kept telling me to go to Hell’s Kitchen, confusing me even more about the situation.  When I finally made it to The Pony Bar, the ribbons and clean wooden tables made it clear that this was the opening week.

Inside, the place was packed with a hip, loud crowd, the exact opposite of my affiliation with the UES.  I went up to the bartender and asked for recommendations off their expansive beer menu.  They sell lots of local breweries, changing each type as the keg is tapped.  You will not find a Coors Light in this place, don’t even bother asking.

The bartenders are extremely well versed in their beer knowledge.  They have adorable sample cups to make sure you get with the brew just right for you.  I ended up with a type described as having a light, wheat but banana flavor.  It was great.

Our stomachs eventually began to grumble and we decided to order some grub.  Completely disregarding out figures, we went for the fried pickles and grilled cheese.  The bartender claimed that their grilled cheese was the best around.  It was very good, but Little Muenster (which will be blogged about soon, promise!) still takes the grilled cheese gold medal.

The grilled cheese tasted more like a mac and cheese on bread.  And I mean that in the best of ways.   I was transported back to the days of freshman year of college making EasyMac in my mini microwave of my Wisconsin dorm room.  It was greasy and delicious, oozing with American cheese.  We were savages on the sandwich, ripping pieces and stuffing our mouths between sips of beer. 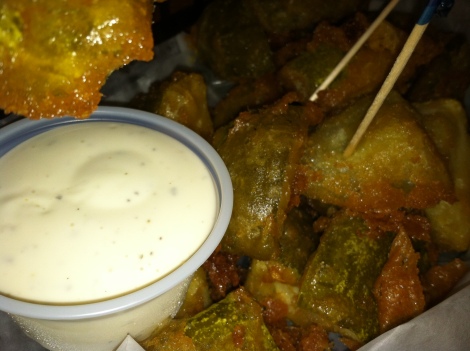 The fried pickles were exactly what it sounds like.  Lightly batter and deep fried with a variation of ranch dipping sauce on the side.  This was classier bar food with toothpicks, leaving out fingers slightly less greasy.  The verdict is still out on these.  It was pretty awesome, considering that the dish consists of warmed, battered, acidic pickles.  I don’t know if I’m fully convinced on their deliciousness.  It’s pretty good, and probably awesome late night food, but I’m torn.

The Pony Bar is definitely a fun, new spot to check out.  I’ll probably be convincing some friends to head to the old location in Hell’s Kitchen, since I am still not completely convinced about the Upper East Side.  But Pony Bar’s addition is beginning to change my opinion.