When your NYC Club Promoter texts you every single Thursday night telling you to come to “CATCH” in Meatpacking, you wouldn’t think that trendy spot would double as a high-end fish restaurant.  Catch, a club-restaurant hybrid, actually serves delicious, unique food that will exceed all expectations.  This relatively new meatpacking hot spot, located in a prime spot right across from the Gansevort Hotel, attracts a beautiful, red-meat hating crowd.

Top Chef Hung Huynh joined forces with the Abe & Arthur’s crew, creating a winning formula that’s already spread to a second location in Miami’s South Beach.  The restaurant itself is extremely aesthetically pleasing without trying too hard.  It’s an open space with wooden tables, relatively bright lights hanging from the ceiling and exposed brick lining the walls.  This simple design allows for all of the well-dressed individuals to act as the main attractions, since this place is the ultimate spot for people watching.

Catch is a three-level restaurant with each serving a different purpose.  The bottom level has a small dining area, but is mainly designated for the bar and a large ice display full of raw fish, where tall, skinny girls sip champagne and politely slurp oysters.  The upper level acts as a gorgeous rooftop lounge, which opens to the select few at midnight.  The middle area serves as the main dining room, where we found ourselves for dinner on a late Monday evening.

The restaurant was packed, but with our reservation we were seated immediately, among a diverse crowd of older businessmen, young frat boys, and twenty-something girls on a night out.  A young attractive waiter smiled politely as he handed us our menus and welcomed us to the restaurant.  The menu at Catch is designed for sharing, with hot and cold seafood appetizers filling the majority of the menu.  There are a few protein options, mainly chicken, for those who were coerced into coming to a seafood restaurant, like our friend, Sydney.

We decided to start the meal in a typical fashion, glancing over the cocktail list.  Each drink is named after some type of aquatic being, adding a kind of cheesy charm to the menu.  I decided to order the Neptune, while Leigh opted to try the Iris and Syd selected a glass of Rosé.

I was slightly embarrassed when my drink arrived, looking like one of the girlie drinks I would secretly enjoy on a private beach in Mexico.  If it didn’t look so ridiculous, I wouldn’t have felt so silly loving this drink.  It’s the ideal balance between sweet, tart, and alcoholic.  The mint mellows out the sweet flavor of the honey and passionfruit.  Rum is always a great counterpoint to fruit flavored drinks. 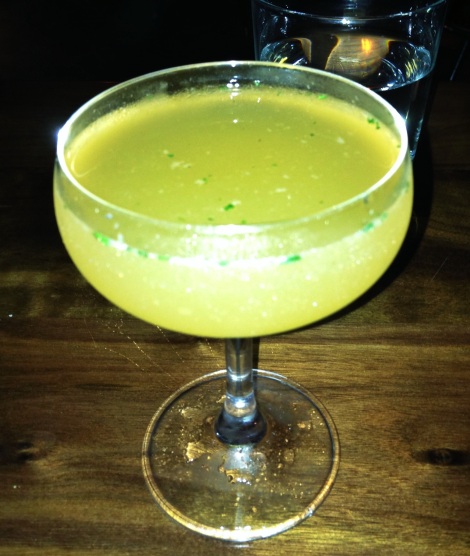 This drink was totally balanced with the mixture of the honey and grapefruit bitters working together to create a harmonious cocktail.  I generally steer away from vodka, but in the case of this drink, it was completely covered up by the grapefruit and mint.  I ended up ordering this drink for the next round because I liked it so much.

It was time to turn to the food.  The three of us decided to start by sharing the Sake Chicken Lettuce Wraps.  Leigh and I then decided to pick a few dishes to share for our main course, selecting one sushi roll and two raw preparations of fish.  We all also decided to share a side order of lobster mashed potatoes, because I think there’s nothing Leigh could love more in the world then the mixture of potatoes and lobster.

Instead of a bread basket, the meal begins with warm pretzels and the whole grain mustard butter. 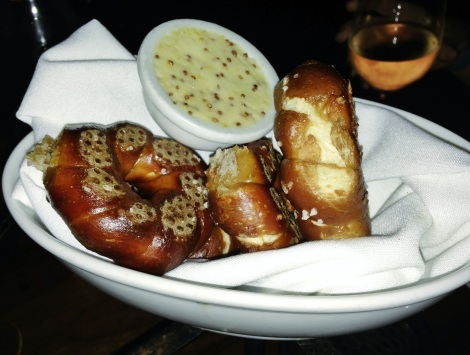 After the excitement from the complimentary soft pretzels, I was ready for our dishes to arrive.  The first, Sake Chicken Lettuce Wraps were placed on the Lazy Susan on the middle of the table, making it to share. 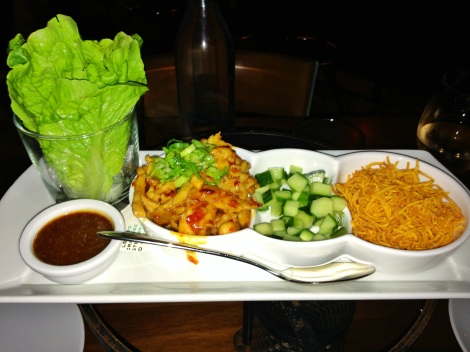 I’ve had plenty of chicken lettuce wraps in my life, and these were easily one of the best.  The pieces of chicken were moist and sweet from the cooking in fruity sake, which is a Japanese rice wine.  The real unique twist were the wildly addicting crispy sweet potatoes, which added an additional layer of texture and sweetness.  Cucumber and lettuce were simple giving a raw, fresh element to the other complex elements. I love hoisin sauce, which is sweet, plum based sauce, typically used in MuShu Pancakes, a Chinese dish.  It tied all of the elements together, adding yet another element of sweetness, without over powering the chicken.  These are awesome.

It was time to move onto the sushi.  We had debated for a while which unique roll to try, finally deciding to go all out and order the Island Roll, made with Lobster, Kiwi and Jalapeño. 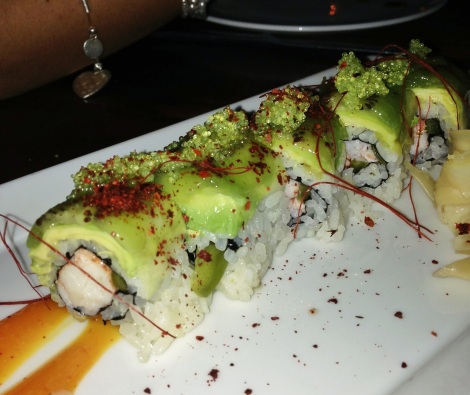 High end sushi rolls are really something special.  Each individual piece is prepared with precision and care.  The perfectly cooked lobster acts as the star of the roll, encased in a thin layer of rice and seaweed.  The kiwi and avocado on the top of the roll adds a sweet, creamy freshness to the lobster.  The last taste lingering on your tongue is the delightful pickled jalapeño and sweet and spicy mango sauce.  It’s a great sushi roll that’s unlike anything you’ll find at your local spot.  It’s sushi for a special occasion.

At this point in the meal, we were deep in conversation, enjoying our food and sipping on the last drops of our cocktails.  The manager approached our table, explaining that they needed to move the table behind us to accommodate guests on the lower level.  He immediately offered to pay for our next round of drinks for our inconvenience.  It was a little awkward to have to stand up for about 5 minutes while the bus boys lifted the large table over our table.

A few moments later, our comped round of cocktails arrived and we toasted to the weird incident.  Shortly after, our main course arrived, which for Leigh and I, were two of the cold appetizers of Hamachi Tartare and Salmon Belly Carpaccio.

I love a good tartare.  Hamachi is a light fish, which is elevated by the creamy, sweet avocado.  The little pieces of potato chip on top of the shaped tartare acts as a lovely crisp, preventing it from being a one-note dish.  Pears give a little sweetness to the fish, along with the creamy sauce binding the tartare together.  It’s extremely light, fresh and flavorful, which are all the staples of a really great raw dish.

We then turned to salmon carpaccio, which highlighted another raw fish preparation. 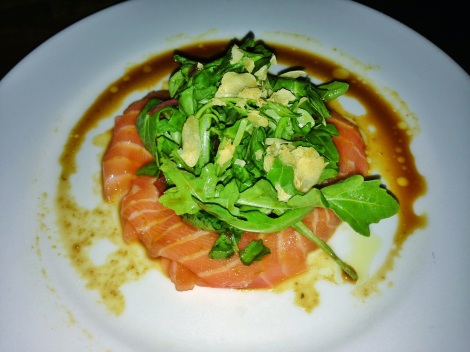 The delicately sliced, sushi grade fish ate like an elevated sashimi dish.  The arugula added a peppery element to the fish that I loved.  It seasoned the fish without having the utilization of cracked pepper.  The earthy and mildly sweet nature of the yuzu sauce infused into the salmon belly, adding a flavor similar to that of a soy sauce.  The crispy sweet and sour onions on top inserted even more flavor into the simple piece of fish.

I liked the salmon carpaccio a lot more then Leigh did, but we both agreed that the hamachi tartare was our favorite of the two.

The winner of the evening, the dark horse, the Lobster Mashed Potatoes. 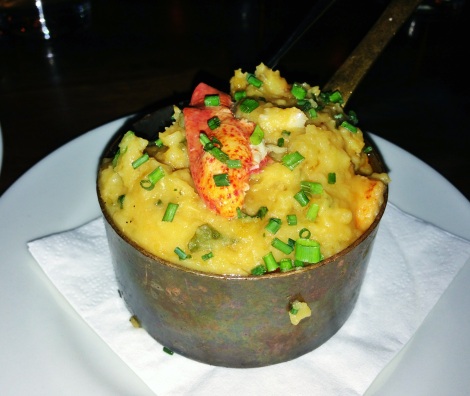 I don’t know how they do it.  These mashed potatoes are absolutely dreamy.  The potatoes themselves are creamy and rich with pieces of skin found throughout the mixture to add texture and flavor.  Big pieces of lobster meat are found throughout, allowing for this to be a more well-rounded bowl instead of a simple side dish.  It’s probably the most incredible, heavenly container of mashed potatoes I have ever enjoyed.

We were so happy and satisfied at this point in the meal, that what happened next could have easily ruined our experience.  The same manager came by our table again, apologizing profusely that they now needed our table to bring downstairs.  They could relocate us across the room and would make it up to us with the bill.  He also offered to send another round of drinks and dessert to our new table, which we hadn’t planned on ordering.  It was just an awkwardly bizarre situation that they promised to remedy.  We weren’t sure what that exactly meant, but willing moved with big, fake smiles on our faces and our cocktails in hand.

Now at our new table, we decided to order the cookie bucket for dessert, which wasn’t part of the original game plan.  But, hey, if it’s free, I’m not one to turn down dessert.

I’m actually glad we ordered dessert, because this cookie plate helped to end the meal on a much sweeter note.  The big chocolate chip cookie was gooey and sweet, but was even better when mixed with the vanilla ice cream underneath the fried oreos.  All of the cookies were good and it was a nice little sampling of sweetness.

While we sipped our drinks, without asking the waiter placed the bill on our table.  After glancing over, we realized all of the cocktails had been removed and assumed the check came when it did so they no longer needed to give us free drinks.  A few other items were removed, causing for the bill to be over 50% less then it would have.  For the mild inconvenience, it was a great gesture, leaving us with a much more positive taste in our mouths.  But overall, it was a really strange thing to happen at such a well-established restaurant.  You would think they’d be a little bit better prepared then to inconvenience us not just once, but twice.

In the end, I left Catch feeling well-feed, a little buzzed and really short.  At 11:30pm on a weekday night, all of the models flock to Catch, as they wait for the Rooftop Lounge to open at midnight.  We gawked over the tall, skinny, beautiful people inhabiting the bottom level.  That kind of sums up Catch.  It’s a fun place to feel pretty and special for the night, and they actually know what they are doing in the kitchen.  It’s a rare combination where a  nightclub knows how to serve great food, attracting a slightly more diverse crowd.  It’s a restaurant I would never bring my parents to, but for a night out with girls or a dinner with that special guy who only has eyes for you, it’s a great spot.