Walking through the Lower East Side around 10 o’clock at night without a few cocktails reveals a completely different city.  Glowing neon signs illuminate the dark, dirty streets, as trendy individuals smoke cigarettes outside trendy city hot spots.  Dirty French, located on Ludlow, embraces the neighborhood, with a bright pink sign marking the front of the restaurant. 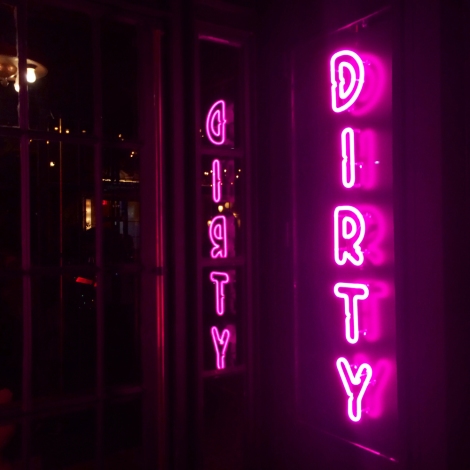 Gorgeous hostess great you with a warm smile, immediate grabbing your coat before leaving you to your own devices.  However, the charming nature of those working the front house disappears as quickly as your coat. We were told our table was not yet ready, and directed toward the back lounge to order appetizers while we wait.  Under no circumstances should you be told to order food while waiting for a table, especially when you arrive on time for a table you reserved a while back. Appetizers are meant to be eaten while situated during your meal, not disconnected in the back lounge among tourists sipping on cocktails as their evening activity.

We stood around for a while, before speaking to the darling back hostess who helped to find real answers about our extremely delayed table.  She found seats for us, offering complimentary glasses of wine, and brought over a tray of buttery flat bread. 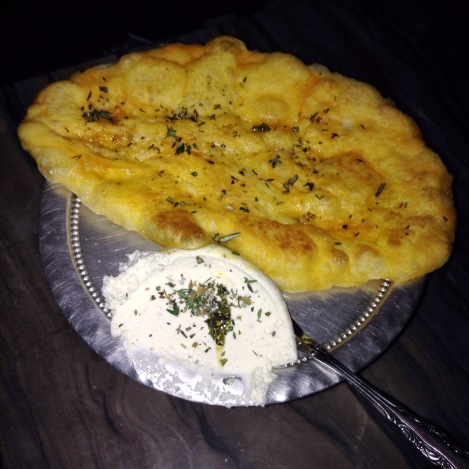 Instead of typical bread and butter, warm pita coated in olive oil and fresh rosemary is paired with spreadable goat cheese that tastes similar to the Boursin spreadable cheeses with herbs.  It’s addictive, delicious, warm and tangy, sweet and savory; a wonderful dish to hold us over while we still waited for our table.

Over one hour after our scheduled reservations, we were finally led to our table; a table we were told was one of the best.  The large red booth was spacious, each of us occupying a bench made for three individuals.  We began to glance over the menus, stomachs grumbling as the clock struck 11pm, and the restaurant slowly began to empty out. 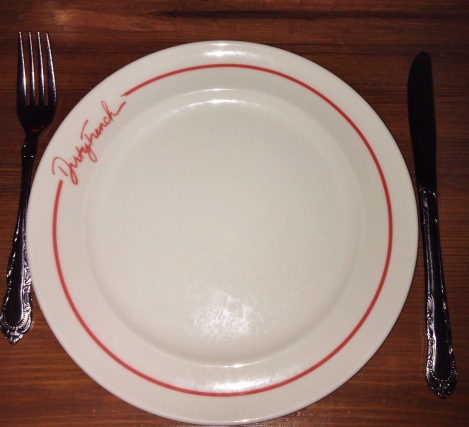 The waitress offered us more ‘complimentary’ flat bread, which we declined, hoping to save room for the meal to come.  We requested suggestions, and deciding to begin with two raw appetizers, Tuna Tartare and Lamb Carpaccio. 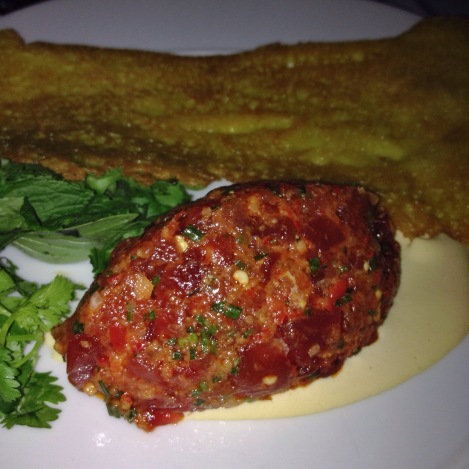 We began with the quenelle of Tuna Tartare, paired with another style of flat bread.  Although the menu lists “bird’s chili,” nothing quite prepared us for the intense heat that would overpower the Tuna.  The heat built so rapidly, it became almost inedible.  I can handle mild heat, but this was an entirely different level.  We asked the waitress why she had left out the extreme spice level when recommending the dish, and she simply said, “it says Chili on the menu.”

The Lamb Carpaccio, topped with grilled eggplant had much more potential. 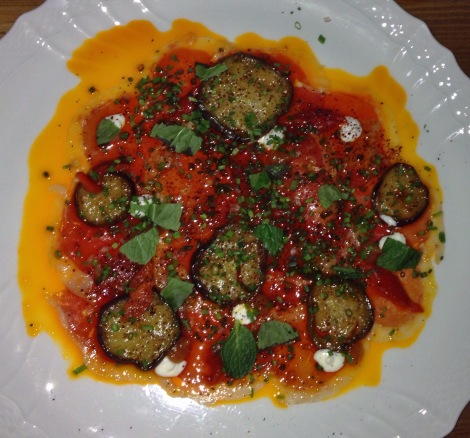 Pools of flavored oil surrounded the Carpaccio, making the delicate pieces of lamb slightly greasy.  Sweet charred eggplant on top stays separated from the oil, allowing it to maintain its vibrant, slightly smoky flavor.  The isolated portion of the carpaccio in the middle with yogurt and mint has a light, delicate flavor. It’s a twist on the Mediterranean dish of lamb, mint and yogurt, that had so much potential, but it’s hard to look past the overpowering pool of oil.

Classic Duck a l’Orange cooked gets a modern facelift with preserved oranges and a delicate plating.  Easily the best dish of the evening. 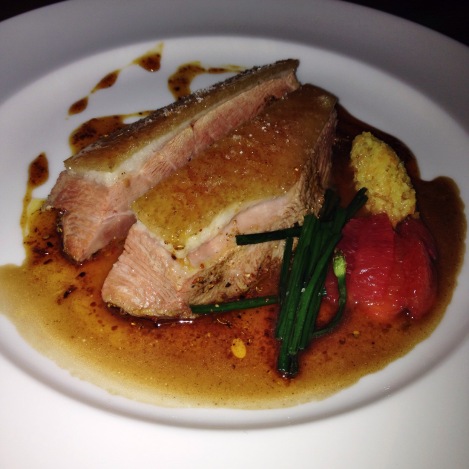 30 day dry aging process, followed by a trip to the 1000 degree rotisserie oven creates the crackling, crisp Duck skin, while the meat remains moist and tender. The skin is flavored with a North African spice blend, and paired with chive buds, showcasing a modern, worldly influence.  Subtle liberties taken with French classic creates a phenomenal version made for modern times. 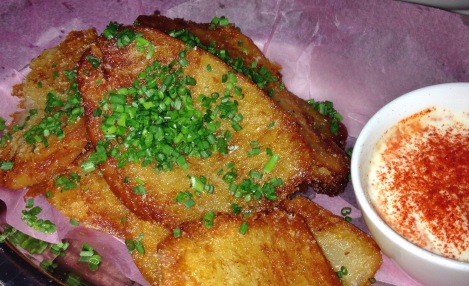 Three separate cooking processes go into the creation of the Pomme Frites.  The potatoes are blanched, baked and then fried, creating a lighter, slightly puffed potato served with a creamy dipping sauce topped with a sprinkle of paprika. They’re crisp, they’re good, but with all of the effort put into making the potatoes, I would think they’d be far more memorable.

In an effort to make a mends for the extremely delayed seating, a tray of fluffy, warm beignets arrived. 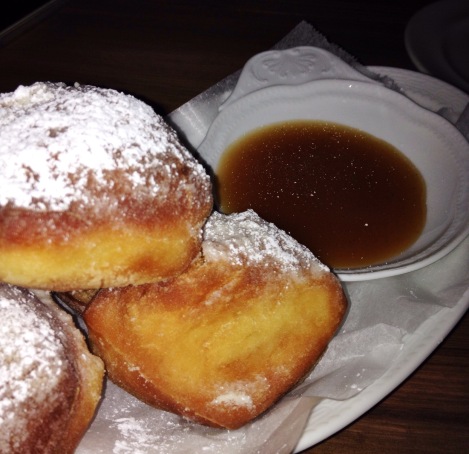 Light airy pillows of dough are coated in powder sugar and piled high.  The adjacent caramel sauce sticks to the beignets, a sweet sauce elevating the decadence of the dish.  This was a high, sweet note to end the meal.

Dirty French knows how to do two things incredibly well; they make phenomenal bread in all shapes and forms.  The flat bread, the crepes, the beignets were all outstanding.  And they know how to roast a damn good duck.  Prepared in a style similar to that of Peking Duck, the Duck a l’Orange is worth a return trip.

The lacking service (our ditsy waitress took my wine glass without offering another, and disappeared for entire courses) doesn’t make the bill seem worth it.  When you want to splurge on a meal, you expect high quality service.  The management is top notch, but the staff below them lacks a professionalism you would expect at a restaurant that has the attention of the city.  Maybe, hey, they just like to play a little bit Dirty.