We wander to discover. To trust our intuition. To listen to that little voice that tells us which alley to turn down and which restaurant to enter. It’s something that, at least for me, feels very lost these days.

I often open my Google maps to direct me to a destination one block away, or put my trust into FourSquare to guide me to the best of something. And after failing not once, but twice to find an outdoor market that seemingly didn’t exist this time of year (thanks, Google) I stopped at a cafe to finish my book, sip a cappuccino and enjoy a croissant. The snow began to fall lightly outside, making Paris impossibly dreamier. The waiter told me it was the first snowfall in two or three years. Magic.

I skipped across the street past a fromagerie where I had purchased two cheeses to bring home (Poulingy St Pierre and Gruyere Suisse, for those wondering). And walked past a charcuterie shop on a side street. I initially continued on, but something told me to turn back.

I went inside to find two other patrons, an American man and a French woman clad in a black fur coat. The woman was scolding the shop owner in French for wrapping the man’s sandwich in plastic wrap. I almost left. As the owner turned to me, I asked what his favorite sandwich was, and he pointed me to the most classic ham that they sell there, and I smiled and ordered it politely. The American man, upon hearing my English, asked where I was from and introduced himself as Keith from Santa Barbara. And quickly then said, how did you hear about this place? Well, I stumbled in, I replied. He then revealed he’s a chef, and flew the 12 hours from California just for this sandwich. Good taste, or good luck, he said. 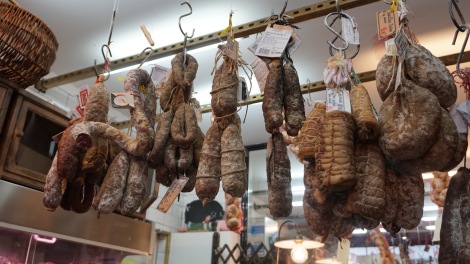 As I sat on my delayed flight back home, trying to savor every bite of this simple, yet divine sandwich — a fresh baguette, ham and a thick layer of butter, I wondered (in a very Carrie Bradshaw way) how much else have I missed out on from being so tied to my phone and the guidance of others rather than trusting myself?

I think I’m going to try to give up FourSquare for a few weeks, and Yelp, and the likes. The next time I’m in an area, I’m just going to go on instinct. And maybe I’ll be wrong, but maybe I won’t. Heck, I had some damn good blintzes the other day at East Village Ukrainian Restaurant and put up a fight with my dad about going there because Veselka next door was a 9.1 and this was a 7.3. It tasted like a 10.

If I learned anything from this trip, is that delicious food is great, of course. But sometimes the method of discovery, at least now in our current environment, shields us from finding whats right in front of us.